Sian Johnston has been consulting on my American Bulldog since February 2018 and the journey we’ve had is a remarkable one.

On the 19th January, Bisquit underwent an operation for a suspected mammary tumour (which proved benign.) She is an extremely large dog, 55 kilogrammes in weight, and after the surgery she presented as lame and could not walk.

The veterinary surgeon could not ascertain the cause, and after taking X-Rays referred me to a specialist. The specialist also could not determine the cause and noted that Bisquit would need to lose weight prior to exploratory surgery.

By this stage I was at my wit’s end, with no clear diagnosis, and a very poor prognosis indeed. I was left with the suspicion that she might have injured her left cruciate ligament during surgery, as she had injured this some 2 years previously, which healed after the use of a custom made brace.

I then called Sian, after findings her details online

.
Bisquit by this stage was in severe distress, being managed with pain medication, anti-inflammatories and Pentosan. (Prescribed by my local veterinarian, who also confirmed that Bisquit might have torn her cruciate ligament.)

Bisquit by this stage could not walk and was crying with pain whenever she tried to do so.

Sian willingly accepted the challenge to attempt to rehabilitate Bisquit and has been working with her ever since. Administering massage, ultrasound and light therapy; first on a weekly basis, and currently bi-monthly she attends to Bisquit at my home. Sian drives a fair distance to see Bisquit, who would have been unable to be transported for regular treatment due to her size and extent of her injury.

It is a testimony to Sian’s skill, professionalism and compassion that Bisquit now is walking without pain. She is getting stronger every day and has also lost a considerable amount of weight.

In my opinion Sian has turned a very serious situation around. I find her empathetic, understanding, extremely knowledgeable and highly competent as a veterinary physiotherapist.

In short, she has saved Bisquit’s life and I have no hesitation in recommending her services whatsoever. 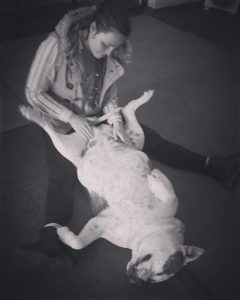